Tradition is in the air!

Krakow is a city that simply loves traditions. Old customs of many types are constantly reviewed and celebrated by new generations. Some of them date back to Medieval or even Ancient times!

Lajkonik Parade is a tradition that probably has its origins in XIII or XIV th century. Probably, as there are many various theories about its background. Some say that it’s one of the pagan rites. Others claim that it descents from Medieval mystery plays.

It’s a movable feast, always taking place during an octave of Corpus Christi. It’s usually at the end of June. 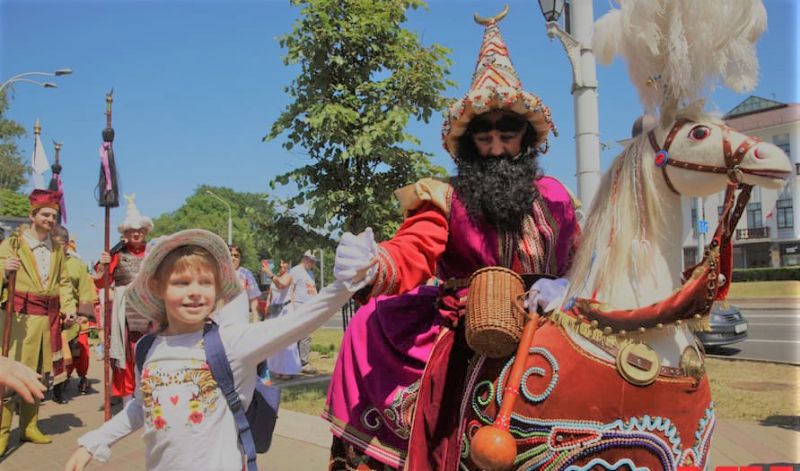 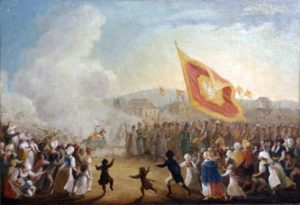 Despite various theories about Lajkonik’s origins, there is one story that all cracovians knows about. In the XIII century, Krakow was threatened by Tatar incursion. As they were . approaching the city, a great panic set in among inhabitants. Everybody was afraid of powerful and murderous invaders. Only one citizen had courage to decide that he’ll fight with Tatars. His movement gave a fighting spirit to everybody and soon he gathered crowd ready for the battle. They won and returned to Krakow on horses, wearing colorful Tatar clothes. That’s why Lajkonik (the brave many) symbolizes victory, courage and fighting spirit of cracovians. 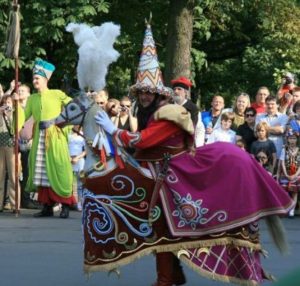 Traditional dress of Lajkonik in which we can see him these days has been created in 1904. He wears of a long and ornate turban with a half moon sign on his head. Turkish caftan with wide sleeves, colorful kontush and a long, decorative robe.

Besides, he’s always armed with saber and a wooden baton. However, one of the most characteristic thing of Lajkonik its his horse, that he is “wearing” around his waist. Also the animal is embellished with ornaments and a plume. 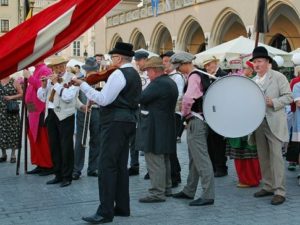 The grand parade starts in Zwierzyniec (a beautiful quarter of Krakow) and follows traditional route to the Main Square. The “main” Lajkonik dressed up in proper traditional clothes proudly leads the crowd through Krakow streets. On his way, he needs to perform two ritual dances that look truly spectacular. One of the most difficult part of his show is so called dance with a flag. During the parade the whole procession stops several times in local restaurants or bars.

Additionally, according to the tradition, the parade is always accompanied by a local band called Mlaskoty. These are professional folk musicians (trumpet, flute, accordion, clarinet, drums and violins) who bring a jolly atmosphere among participants.

Lajkonik Parade usually starts around noon and lasts till the late evening. It ends with the third dance of Lajkonik and his solemn urbem salutare – a bow for the city.