What are the most shocking Auschwitz images one can see in the concentration camp? Well, it’s hard to tell as everything seems to be equally terrifying once you cross the entrance gate.

Auschwitz Birkenau Memorial and Museum covers as much as 200 ha including two parts of former Nazi concentration camp in Poland. It’s a place of around 300 buildings (original and replicas), thousands of camp objects (inmates’ personal things, documents and officers tools).

Is there something more disturbing than victims of holocaust photos? In fact, such Auschwitz photos stay in visitors’ minds forever. Once you see the faces of former concentration camp inmates with their painful and empty eye, you get petrified. There are several buildings in Auschwitz museum, where you’ll see numerous inmates of Auschwitz images. Additionally, they are framed and described giving an info about particular prisoners’ lifetime and cause of death. 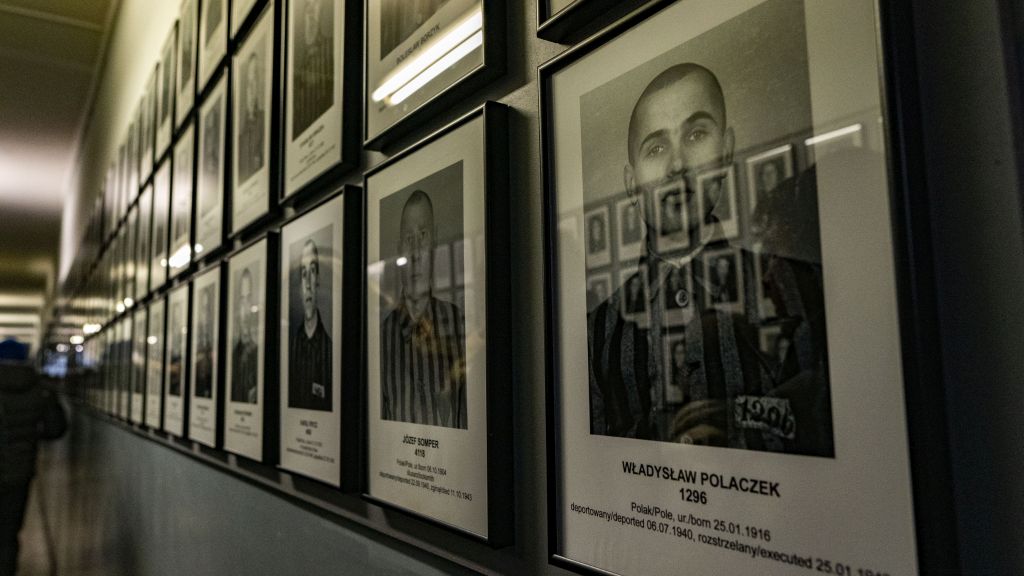 The exhibitions of several piles made of prisoners’ personal things are the objects of the biggest interest in museum. We can find millions of Auschwitz images showing these exhibits online. However, they are much more terrifying in reality. They can make you realize how many people died in Auschwitz being deprived of their dignity and shame.

Upon arrival to Auschwitz extermination camp, all inmates came up to selections. It entailed stripping all their belongings away by Nazi officers.  Then, all objects were moved to special buildings in the camp. After  Auschwitz  liberation  all  survived  objects were turned  into  these  amazing  exhibitions.  Here  are  some  Auschwitz  pictures  of  famous  showcases:

Auschwitz museum conservators did great job by reconstructing numerous prisoners’ barracks. Nowadays, we can see exactly how their interiors looked like. Here are some Auschwitz images of some prisoners’ wooden barracks in Birkenau. Although they are empty now, one can imagine crowds of hungry and crying people inside. In fact, such barracks were always a “home” for too many inmates (at least twice!). People were hustling in small bed bunks not being able to move without touching somebody else. Although Auschwitz images of the barrack may seem quite spacious, they aren’t. In reality, people were striving to survive in poor conditions without any sanitary, clean space or heating. 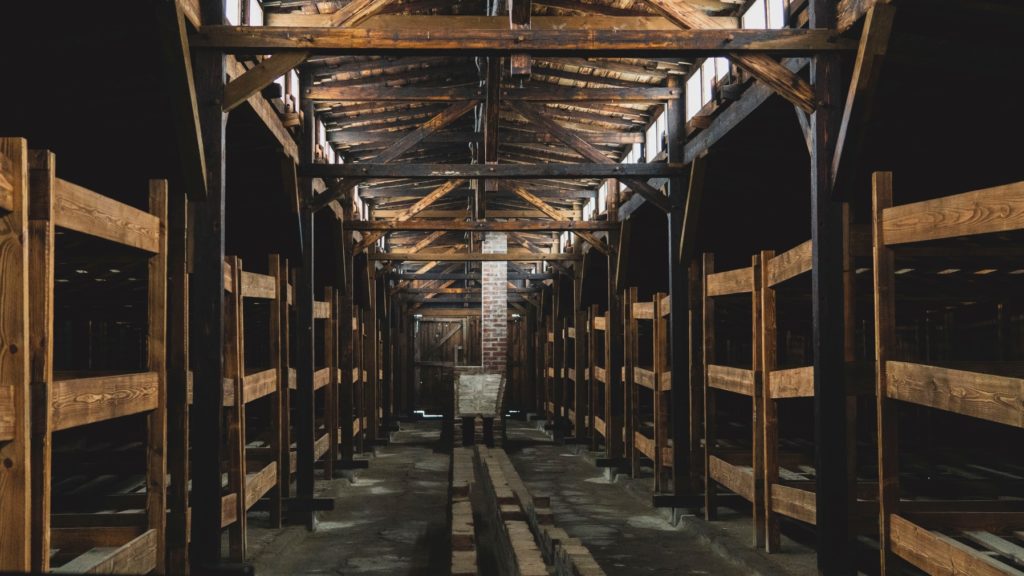 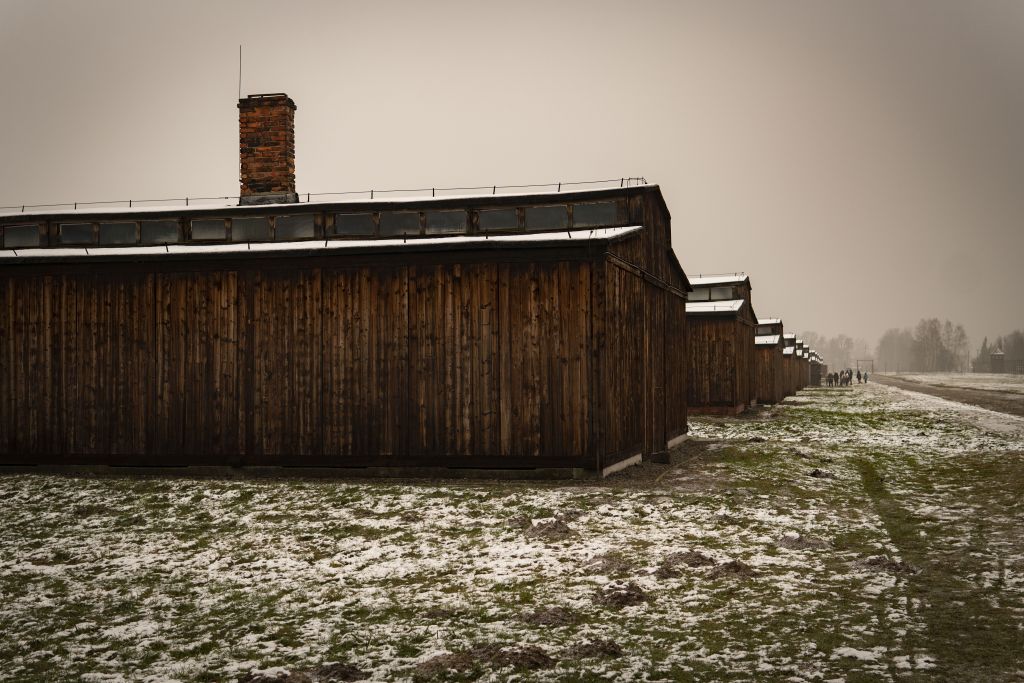 By deciding to visit Museum in Oswiecim be prepared for disturbing Auschwitz images, that’s for sure. Although everybody knows what happened there, it still shocks to see some original camp objects. For example, tools used to conduct mass extermination: Zyklon B cans, ruins of gas chambers, crematoria… Although Germans tried to destroy all evidences of their crimes, they didn’t manage to do that. The fact that they blew gas chambers up, did’t make us to forget about how many people they had killed. Jewish Holocaust photos are brutal. Unfortunately, they all are dreadful Auschwitz facts… 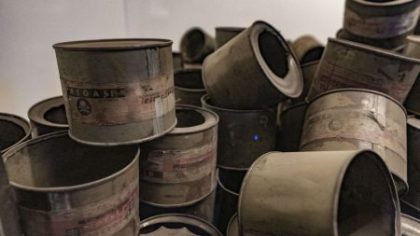 Thinking about Auschwitz many people imagine Auschwitz photos of its historical ramp that leads to the famous, bricky gate.  In fact, not everybody knows that it’s the main entrance to Birkenau, the second part of camp complex. The original fragment of long ramp often appears at different Auschwitz images. Beyond the gate, one can see endless rows or barracks and gas chambers ruins. There is also  the historical wagon on the other side of the gate. What makes it so special (and terrifying) is that it was originally used for transporting inmates into the camp. During such transports, prisoners had to survive many hours or days without food, water and space to move. Many of them died even before their arrival…

Auschwitz-Birkenau Memorial and Museum covers as much as 191 ha. No wonder that we can often see barbered wire fence on Auschwitz images. It’s 13 km long in total! Both Auschwitz I and Auschwitz II-Birkenau are surrounded by grim studs.  What’s more, this fence is exactly the same fence that stopped millions of victims to escape from their death… Here are some fence of Auschwitz pictures including Holocaust prisoners photos beyond barbered wire.

,,Funny” Holocaust photos – why people do them?

From time to time we hear about new Auschwitz pictures that ,,profane” the memory about concentration camp victims. In fact, many people treat museum in Auschwitz as another tourist attractions. That’s why they behave there as if they were in any other museum taking many selfies and posting them on Facebook. Although it’s hard to believe, there are people who make sweet faces with ,,arbeit macht frei ” gate in the background. Undoubtedly, it’t inappropriate and should never take place. Fortunately, if such Auschwitz pictures or Holocaust photos appear online, they are immediately widely criticized, both by authorities and readers. It shows, that people won’t let such things to go echoless. Nevertheless, we should all remember that not every photo with our faces deserves likes on Facebook or Tweeter…

Undoubtedly, the experience we get in Auschwitz museum is incomparable. Although Auschwitz photos can familiarize you with the place in general, they are unable to make you feel its overwhelming atmosphere. Auschwitz photos can be either incentive to come to the museum or the opposite. Some people are in fact turned off by awful images they see online. They afraid they are not strong enough to see all these things in reality.

What is your attempt? Are you brave enough to come to book Auschwitz trip?