The old Flower Brotherhood of Krakow has a new king! He was elected from the finest candidates and best riflemen.

The brotherhood dates back as far as to XIII th century. When Krakow was threatened by Tatars, they were training citizens in mastery of arms. From that time, the most important custom of the Brotherhood has been shooting competition. The best shooter of the year wins the most precious treasure of the organisation – Silver Cook. At the same time he becomes the Flower King. 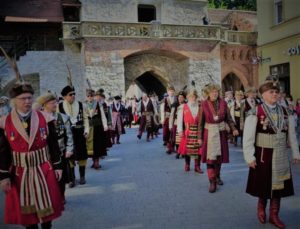 This year’s edition took place on 2nd June at the Main Square, that was full of people. Procession of Flower Brotherhood, accompanied by police escort, marched into the Main Square.

Then, at 11 am, Brotherhood participated in holy mass in St. Mary’s Basilica.

After the mass, procession of Flower Brotherhood members came on stage. They were followed by  many important figures – including President of Krakow.

The best shooter of the year – Adam Rajpold, became the new king. He collected precious prize – Silver Cook and proposed a vote of thanks.

Then, the procession, together with new king, went proudly to Strzelecki Park for a picnic!

Events such as Enthronement of the Flower King are a proof that Krakow is a city that loves tradition. And that’s what makes this place special.

If you have a chance to be here, keep up with Krakow events, especially in the summer!